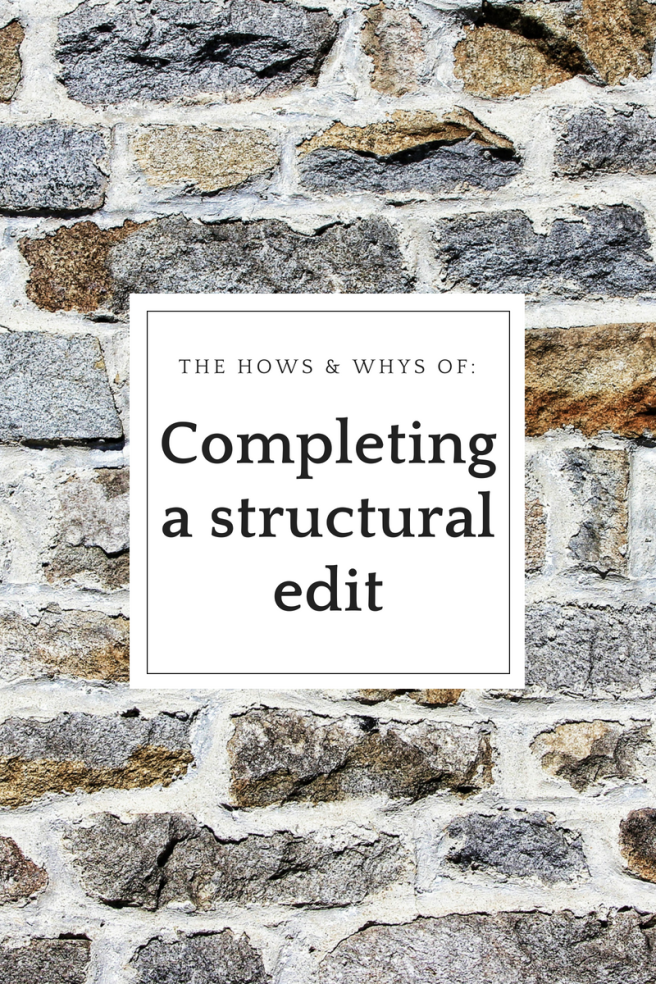 Three months on from receiving editorial notes and I’m out the other side of my first structural edit. I feel equally wrung out and exhilarated by how much better my manuscript is looking at this point. Here are some editing stats I collected along the way:

The manuscript is now off to some sensitivity readers (I will do a post on this at a later stage) and once I’ve received their feedback and edited accordingly, I will send it back to Jane at Text Publishing. Hopefully I’ll have done enough for it to be ready for a line edit, but we’ll see. This is my first time and it’s a huge learning curve, so if it comes back for another structural edit, that’s OK too. I hardly feel qualified to give advice at this stage of the process, but I thought it might be worth sharing a few of the things I’ve learnt so far.

Work with people you trust

I’ve touched on this before, but I thought it’s worth mentioning again in relation to the structural edit. It would be extremely hard to dive into a potentially huge edit of your manuscript with someone you don’t have extreme faith in. The notes I received back from Jane varied from small changes (fill in more backstory of this character) to much larger ones (change the way you include dialogue throughout). There was a lot of planning and work that went into implementing those changes and I wouldn’t have been able to do it if I didn’t trust that my editor had the same vision for my story as I do.

I never once thought ‘who is this person telling me what to do with my story?’ because it didn’t feel like that at all. It felt like someone shining a light on the shadowy parts of the manuscript so I could get in there and scrub them clean. One of the best pieces of advice my agent Danielle Binks has given me is to think long and hard about who I choose to work with and to make sure it’s a good fit. That really has held me in good stead.

Keep a one notepad for timelines and big picture details

I have been scribbling notes for this manuscript since I started working on it nearly four years ago. Quotes, words, character descriptions, sketches, and even some late night musings that I struggle to decipher to this day. I found it was extremely helpful to keep a particular notepad for things like timelines, dates, and background information that I could refer to during the structural edit, because making one change here can bring on a whole lot of changes over there. It saved me having to go back through the manuscript or the pile of notebooks to find what I was looking for, like when my protagonist first met her best friend, or what her aunt liked to do at Christmas time. I’d like to say I could remember all of those smaller details off-cuff, but my brain was whirring with so many aspects of this story that it was a huge help to have something concrete to refer to.

When in doubt, print it out

I had a few sessions where I got a big chunk of editing done in one hit. I’m talking 5-6 hours of solid work in one sitting. It’s perhaps one of the benefits of being neurodiverse, I really can dedicate myself to one task for longer periods of time. That being said, I sometimes found myself completely fried from staring at a screen and jiggling words around. I found the best thing to do when I couldn’t stand to look at a screen any longer was to print the manuscript out and read it like a book. I got a much better feel for how the story was flowing and I picked up things I don’t think I would have figured out working on my laptop. Another benefit of having a hard copy of your manuscript is that you can scribble all over it. Some of my notes were just ‘yuck’ and ‘no’, but I did write some lengthy new parts in the margins when I was in the flow of reading and knew exactly what I wanted to add.

Don’t be afraid to kill your darlings

SORRY. But it’s true. There were scenes I’d written in my first, first draft that I think I was holding on to for nostalgic purposes rather than because they added to the story. It hurt to cut them out, but it freed up the story so much and kept things moving at a much better pace. If it doesn’t add to the story, get rid of it. You won’t regret it in the long run.

I’d love to hear your tips and tricks for editing. Am I kidding myself to think I’ll only have one round of structural edits? Should I bulk buy my chocolate supplies now?

One thought on “Tearing down the walls (the structural edit).”